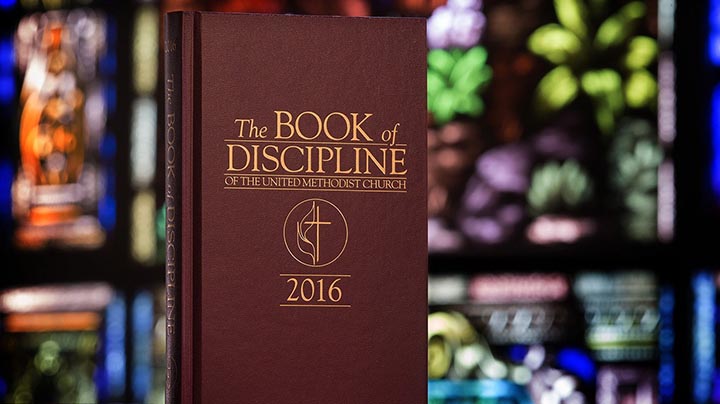 The Judicial Council, at its April 2019 meeting, reviewed actions taken by the special General Conference in February. The council serves as The United Methodist Church’s supreme court. General Conference, the denomination’s top lawmaking body, passed the Traditional Plan, which enhances current policies about homosexuality and strengthens enforcement, and approved procedures for local churches to disaffiliate from the denomination and retain local church property.  (Continue Reading)

In the days immediately following his crucifixion and resurrection, Jesus appeared in mysterious and surprising ways. Let us be open to his presence wherever we gather, worship, pray, serve, and welcome all people.

Thomas, not present, is given a second chance. Jesus appears again a week later in the midst of the disciples and invites Thomas to believe and to place his own hands in the injured nail prints and the gashed side of the resurrected Lord. Jesus appears on the road to Emmaus and Cleopas and the other disciple don’t recognize who Jesus is until they sit at table and break the bread and there He is.

Jesus appears on a lakeside as the disciples, back at their fishing task, catch no fish until they are beckoned to cast their nets on a far side. On the shore awaits a breakfast of charcoaled fish and bread. This is the way the risen Lord appears to you and to me – in surprising ways. In this season, in this great Easter season, we anticipate Christ’s resurrection, power and might in our shared life.

As the Judicial Council meets this week to review the legislation passed at the called session of the General Conference, we pray for them and we know that the resurrected Christ will be with them and with us in every place where United Methodist people gather, worship, study, pray, serve and welcome all people.

Alleluia! Christ is risen. The Lord is risen indeed. 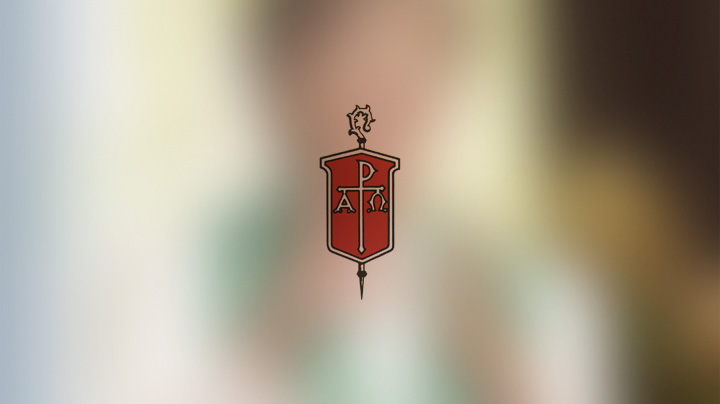 TO:  All United Methodists
FROM:  Bishop Bruce R. Ough, President Council of Bishops

Grace to you and peace from God our Creator and our Lord Jesus Christ.

Today, the Judicial Council released its decision on a request for a declaratory decision from the South Central Jurisdiction (SCJ) in response to the Western Jurisdiction’s (WJ) nomination, election, consecration and assignment of Karen Oliveto as a Bishop of the United Methodist Church.

In its decision, the Judicial Council ruled that the consecration of a gay bishop violates church law but also said Bishop Oliveto “remains in good standing,” until an administrative or judicial process is completed.

This decision means Bishop Oliveto will continue as a Bishop of the church until such process is completed.

Yet, we acknowledge that the decision does not help to ease the disagreements, impatience and anxiety that permeates The United Methodist Church over the matter of human sexuality, and particularly this case.  Our compassion and prayers of intercession extend to all those who are hurt, relieved, confused or fearful.

The decision does not change the Book of Discipline. The Judicial Council’s actions are specific to the cases that they are requested or required to consider.  Only the General Conference speaks for the church and has the authority to change the Book of Discipline. The Council of Bishops will continue to exercise temporal and spiritual oversight support of the church’s mission.

The Council of Bishops remains committed to the unity of the church and the flourishing of its mission. We are confident of the work that the Commission on a Way Forward has begun and we believe the Holy Spirit is working through the Commission and Council to accomplish God’s purposes.

I am encouraged by the relationships that are developing within the Commission.  The distinct and diverse opinions among its members reflect the richness and vitality of The United Methodist Church. The Commission is committed to its task. I believe that their work will bear fruit as we meet for a Special Session of the General Conference in February 2019.

We continue to urge the entire church to stay focused on the Commission’s work as our best opportunity to determine God’s leading for a way forward. We believe the God who began a good work in us will be faithful to complete it (Philippians 1:6). We are strongest when we remain in connection with each other.

We urge you to join your bishops in daily prayers for all United Methodists and for the denomination as we tenderly hold the unity and mission of the church in our hearts and hands.

Just as Jesus’ disciples were patient in waiting for the coming of the Holy Spirit after the ascension of Christ into heaven, we too are being called to wait for the revealing of what God has in store for our church. In this Easter Season, let us hear one another, let us understand one another, let us maintain the unity of the Spirit in the bond of peace.

Where do we go from here?  We put our trust in God to strengthen us even as we hold differing views about human sexuality. We must continue to love one another just as Christ instructed us to do. It is by loving one another fully that the world will know we are Christians (John 13:34-35).  It is through this incarnational love that we go forth to make disciples of Jesus Christ and transform the world.

Nearly every day, I hear an inspiring new story of how the people of The United Methodist Church are at work in the world transforming and enriching people’s lives. This is what we’re about. This is our calling. This is the work we do together, no matter our differences. May we continue to do so for the greater glory of God.

Before tackling the pile of petitions before them, delegates to General Conference 2016 voted to fill vacancies in key positions on the Judicial Council, the University Senate and the Commission on General Conference. And then, voting officially began.

The Louisiana Episcopal Area leader reminded those attending General Conference 2016 that God calls all to “bear fruit for God’s sake.” Preaching from Matthew 22:1-14 and the parable of the king’s wedding banquet, she said God invites people to come as they are, but not to stay as they are.

The lack of youth delegates among the 864 delegates to General Conference 2016 means that for the second time in a row, the commission that runs the denomination’s top legislative assembly won’t have a youth delegate.

The new clergy members are the Rev. Øyvind Helliesen of Norway and the Rev. Luan-Vu Tran of Lakewood, California. Elected as lay members were Ruben Reyes of Manila, Philippines; Deanell Reese Tacha of Lawrence, Kansas, and Lídia Romão Gulele of Maputo, Mozambique.

Judicial Council members are elected for eight-year terms, and four council members elected or re-elected in 2012 are still serving those terms.

The demonstration began shortly after the 2 p.m. plenary session, presided over by Bishop Michael Coyner of the Indiana Episcopal Area. After demonstrators left the plenary, Coyner called for prayer before business resumed.

– Delegates narrowly defeated an effort to add two bishops right away, in Nigeria and in Zimbabwe. Instead, they favored the recommendation of the Standing Committee on Central Conference Matters to add five bishops after General Conference 2020.

– The Ministry Study Commission titled “Deepening the Theology of Ordination” passed on the first consent calendar. It provides clarity around the meaning of ordination, sacramental authority and the Holy Spirit’s role in that.

– The Rev. Stephen Wende, a Texas Conference delegate, made a motion asking to set aside everything but closing and opening prayers until the plenary considers all committee-approved petitions and “necessary elections.” His motion was referred to the Committee on Agenda, which recommended unanimously that there be no changes to the schedule.

Celebrations
As Africa University approaches its 25th anniversary, delegates to the 2016 General Conference took a few moments Monday afternoon to celebrate the Zimbabwean school. “You and The UMC have answered a call to witness through this transforming ministry,” Munashe Furusa, vice chancellor of Africa University, told delegates.

United Methodist Women called attention to the plight of poor and marginalized communities struggling with water contamination during a lunchtime rally May 16 at the Oregon Convention Center plaza. The event was part of the UMW Day celebration during General Conference, commemorating UMW’s upcoming 150th anniversary.

The May 16 session also contained celebrations for The United Methodist Board of Higher Education and Ministry, the church’s Four Areas of Focus and the 250th anniversary of John Street Church in New York City.

In other news
More than 1,500 United Methodist clergy have signed a letter stating they would refuse to fill the pulpit of a LGBTQ pastor who was removed for “God’s given sexual orientation or gender identity.”

United Methodist bishops have adopted a “Covenant of Accountability,” in which they pledge to work for church unity and remain in community with each other despite differences in Christian conscience. 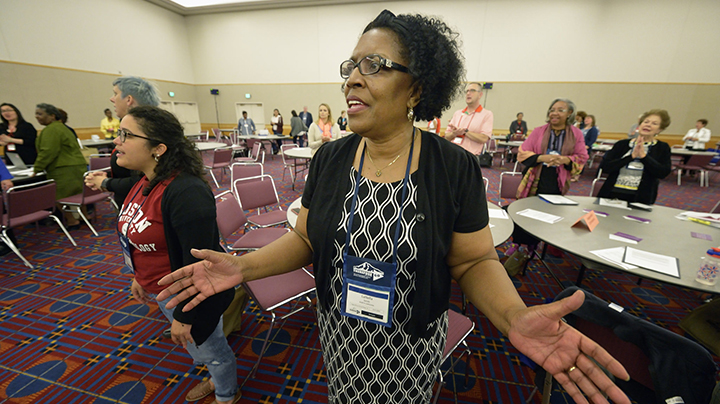 With a drum welcome from indigenous peoples of the Pacific Northwest, United Methodists gathered for the 2016 General Conference, the top legislative body of the denomination, joined in a cacophony of “alleluias” in many languages during opening worship.Meeting May 10-20 at the Oregon Convention Center, the 864 delegates will consider 1,000 petitions that will determine how the 12.3-million-member denomination orders its ministry, structures its agencies and addresses social justice issues, including human sexuality, for the next four years.

The theme of the 2016 General Conference is “Therefore Go.” The Commission on the General Conference selected the theme that ties to the roots of The United Methodist Church in Christ’s Great Commission (Matthew 28:19-20). Directing music and worship is the Rev. Laura Jaquith Bartlett of Eagle Creek, Oregon.

Delegates from the United States, Europe, Africa and the Philippines opened the session with the Sacrament of the Lord’s Supper and an address by San Francisco Area Bishop Warner H. Brown Jr., president of the Council of Bishops.

Plan UMC Revised partly unconstitutional
One of the proposed plans to realign the structure of The United Methodist Church will need yet another revision if the denomination’s top legislative body decides to adopt it.

“Plan UMC Revised” gives new authority and power to the Connectional Table, a church coordinating body; realigns the general agencies and eliminates three commissions. In Decision 1310, the court mostly rejected legislative language that would give the Connectional Table new authority in the hiring and firing of agency top  executives. However, the church court affirmed that General Conference has the authority to discontinue commissions, as proposed under Plan UMC Revised.

African digital divide?
At General Conference 2016, delegates are supposed to use a tablet computer to register their desire to speak, and some African delegates aren’t happy about it. Central conference delegates have been given their own tablet computers for online access to the Daily Christian Advocate and other relevant documents, but there is concern that delegates lacking a certain degree of skill with tablets will struggle with the new electronic queuing system.

Bishop Warner H. Brown Jr., president of the Council of Bishops, said he has heard the Africans’ “digital divide” concerns and has relayed them to the Commission on General Conference. He said he’s been assured accommodations will be made, as needed.

An unofficial ordination
Susan Laurie, 21 years after answering God’s call to ministry, was unofficially ordained as a United Methodist pastor by a grass-roots group of LGBTQ people and supporters at 10:32 a.m. inside the Oregon Convention Center.This ceremony is not officially recognized. The United Methodist Church does not allow “self-avowed practicing” homosexuals to be ordained.

The time of the ceremony was significant. It was a reference to Judicial Council Decision 1032, which ruled gay people could be refused membership in The United Methodist Church because of their sexual orientation.

After the laying on of hands and prayer, Laurie and her wife, Julie Bruno, served Holy Communion. In other news:

One of these decisions related to the district transitions we have recently undergone. The other decision related to our financial support of the NC Council of Churches.

Read the full text of these decisions on the Episcopal Rulings page.